Four important Byzantine historians have left narrative texts about the expansion of the Ottoman Empire, the gradual disintegration of the Byzantine Empire and the capture of Constantinople by Sultan Me?emmed II Fati? (1444-1481) in 1453 : Critoboulos from Imbros, Laonicos Chalcocondyles, Georgios Phrantzes and Dukas. This new Thesaurus, the twenty-fourth of the collection, is devoted to the analysis of the lexicon of the latter. The Historia Turcobyzantina by Dukas, described by B. Flusin as ?«a parallel history of the Palaiologoi and the Ottomans, until the disappearance, already accomplished, of the former and the announced end of the latter?» is a text often used by modern historians, but it is not yet studied enough for itself. Dukas uses a mixed Greek language : the author is a scholar, but not a purist, and his lexicon contains many loanwords from languages spoken by peoples living in the Mediterranean world during the fourteenth and fifteenth centuries. The thesaurus follows the edition of V. Grecu wich was published in 1958. The concordance and the lexicographical tools developed for this collection are accompanied by an index of loanwords coming from Turkish, Arabic, Persian, Latin and Romance languages. The authors received the kind assistance of Professor Sophia Kotzabassi who is preparing a new edition of Dukas expected to be published in the Corpus Fontium Historiae Byzantinae. As the title suggests, this volume also explores the lexicon of three other texts, minor works which are not long enough to create a thesaurus, if they are studied individually : i) an anonymous account of the siege of Constantinople by B?yaz?d I between 1394-1402, edited by P. Gautier in 1965 (= BHG 1063z) ; ii) a narratio of the siege of Constantinople led by Sultan Mur?d II in 1422 written by Jean Cananos, published by E. Pinto in 1977 (BHG 1064) ; iii) the didascalia of Dorothy, Archbishop of Mitylene, addressed to the inhabitants of Constantinople during this attack and published by Chr. Loparev in 1906. Languages: Greek, French. 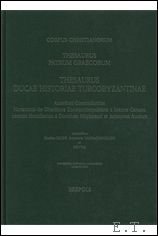